2020 Festival – a message from our Artistic Director Angus Smith

In light of the ongoing Covid-19 pandemic, we are sad to announce the cancellation of the 2020 Music at Paxton Festival. Please click here for a full statement.

Background
Established in 2006, Music at Paxton is a charitable organisation dedicated to bringing exceptional chamber music to a wide audience – both young and old, north and south of the Scottish Borders – to share, inform and inspire.

Music at Paxton has become an established fixture on the cultural calendar, and its unique character reflects the close relationship with Paxton House itself. The Picture Gallery where the main concerts are held creates the ideal setting and acoustic, and provides:

“…the perfect balance of intimacy and grandeur that invites the audience to play an active part in the performance and allows the musicians to feel warmly embraced in a thrilling atmosphere.”Doric String Quartet: 2016 Artists

By special arrangement with Paxton House, the Festival presents more intimate programmes elsewhere in the house, each location adding its distinct quality to create a unique ambience.

Music at Paxton is passionate about opening the world of chamber music to the widest possible audience, and the Festival enjoys a thriving partnership with Live Music Now Scotland. Each spring, they perform in our free ‘taster’ concerts, and deliver programmes in schools, care homes and day centres throughout the Borders in the weeks leading up to the Festival.

In Autumn 2018 Music at Paxton appointed a new Artistic Director to succeed founding director Helen Jamieson. Angus Smith brings with him considerable experience from differing perspectives of the music business. He is a singer with an international reputation,  as founding member of the award-winning Orlando Consort. Since 2010 he has also been Artistic Director of Sheffield-based ‘Music in the Round’, the largest promoter of chamber music in the UK outside London and winner of the prestigious Royal Philharmonic Society’s Award for Chamber Music and Song in 2012. Angus works closely with Music at Pxton’s General Manager Elizabeth Macdonald, who has extensive experience of festival and event management from her previous work with the Edinburgh International Festival, the University of Edinburgh and her own company, Anwyl Ford Ltd.

Music at Paxton enjoys the support of an enthusiastic and engaged Board of Directors who bring skills from a wide range of fields and contribute enthusiastically to fostering the Festival’s ambitions.. Constituted as a company limited by guarantee with charitable status, the board meet regularly to secure the short- and long-term  sustainability of the Festival. 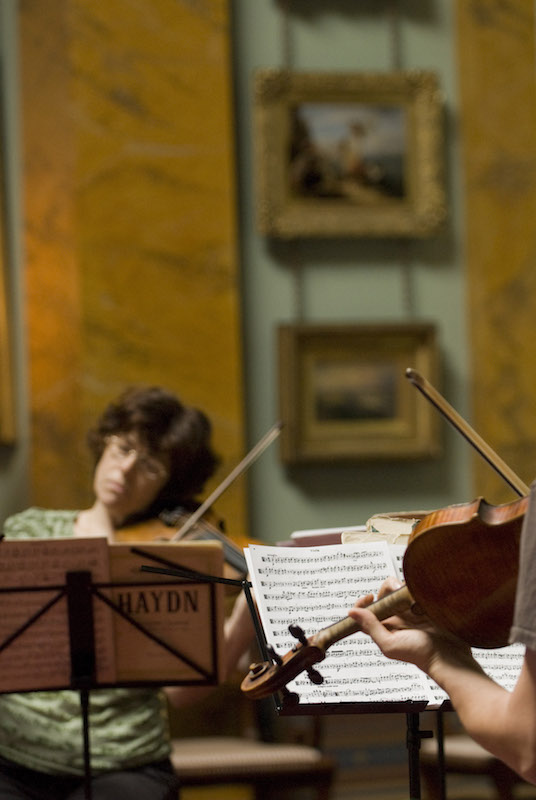 The St Petersburg Quartet rehearse in the Picture Gallery.

This site uses functional cookies and external scripts to improve your experience.

NOTE: These settings will only apply to the browser and device you are currently using.

We use tracking software (“Google Analytics”) to monitor website traffic patterns and usage to help us develop the design and layout of the website and enhance the experience of our website users. This software does not enable us to collect any personal data.